Write your awesome label here.
The Polybridge node is designed to bridge geometry together in a variety of ways.
Drag to resize
Summary:
The best way to use this node is interactively through the viewport.  To do this, try utilizing the c an v hotkeys while navigating through the pie-menus.  The node also features two inputs:  One for the incoming geometry and the other for "spine geometry."  This geometry can be used to guide the shape of the bridged mesh as it traverses one end to the other.

Houdini also seems to like it best when you select the first edge loop of your mesh, then activate this tool, then select the edge you'd like to bridge to (in that exact order).  At the moment, it will not automatically understand that you want to bridge between two selected edges if they are both highlighted at the same time.

Tip:  The hotkey for selecting an edge loop is Shift + a + middle click

--  This will add divisions along the newly bridged geometry.

--  Straight = The polybridge will create a straight line between the source and destination edges.
--  Curved =  The polybridge will try to create a curved bridge between the source and destination edges.  There are many options to control the shape of this curve through other settings on this node.
--  Curve From Second Input = This will attempt to take the shape of a curve connected to this node’s second input.

--  When the polybridge goes to bridge the polygons, it will start by trying to pair one edge of the source with one edge of the destination group.  Once this "pairing" occurs, it will then continue connecting edges based on the direction specified by the edge's winding order (more info on what the "winding order" is below).  In practice, as you change this, it will try to shift the initial edge that gets paired and it's useful for un-tangling bad polybridge operations.

--  The Polybridge node requires a group for the source and the destination.  This group is responsible for selecting the geometry that's part of the polybridge operation.  For more info on groups, please visit the Group Node Bible entry.

Divide Into:
--  Connected Components = By default, if you have a bunch of edges that are connected, the polybridge node will see this as one "component."  So, when it goes to bridge, it will treat those connected edges as one thing.

--  Individual Edges =  Unlike connected components, the polybridge will not treat the connected edges as one thing.  Each edge is it's own candidate for bridging.  In practice, this will create a unique bridge for each edge.

-- According to the docs, "If you want to define multiple source loops with edges/faces that happen to be adjacent, they will just look like one thing to the node. You choose a point/edge Split group that divides adjacent faces/edges into separate groups.
(If you are bridging edges, you split with a point group. If you are bridging faces, you split with an edge group.)"  In practice, I find that it's not very common to use this parameter.  It's probably best to just create multiple polybridge nodes to keep yourself organized.

--  The winding of the polygon describes how it is drawn.  This winding order can be used by the poly bridge node to determine how it should pair the edges from the source group to the destination group.  In practice, if you find that your extrusion is twisted incorrectly, then it often helps to toggle this on or off.

--  This option is only available when "Curved" or "Curve from Second Input" is selected.  This parameter will determine the initial direction that the curve is heading towards.  By default, you have "Auto using" ... which is what you'll want for the majority of situations.  The other option you may want to consider is "opposite" which will go in the opposite direction of whatever you specify next...

--  Explicit Direction =  The curve will start heading in a direction that you specify.  See below for what it looks like when you have the Loop Normal vs. Explicit direction: 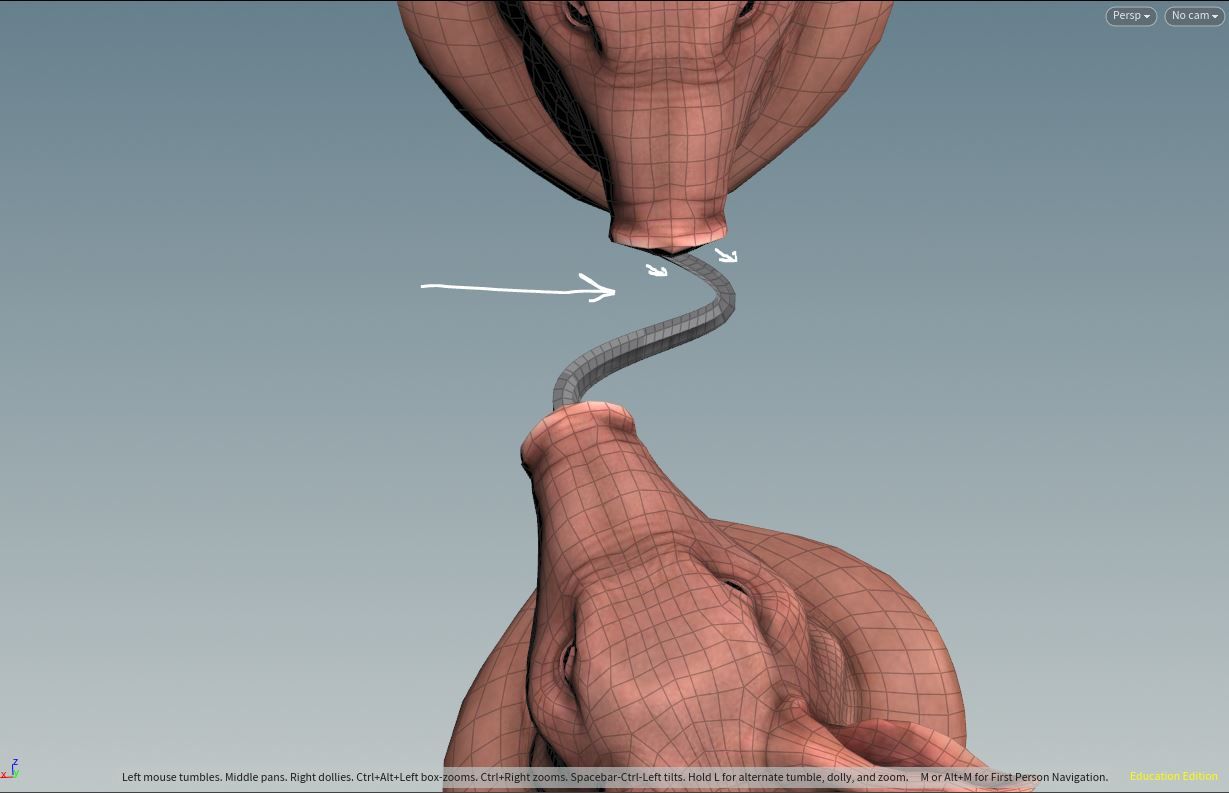 The magnitude and stiffness can then be used to further adjust the shape of the curve that you're looking for.  The best way to use those parameters is by adjusting them to what you like.

-- You don’t need to create a mesh when bridging. This may be useful is you’re just trying to generate Spine Sample Points.
Mesh Group:

-- This will group the bridged polygons according to what you specify here.
Attach to Input Geometry at Source + Destination:

-- If you turn this off, then it will detach from the source or destination.
Clip Start + End:

-- This will allow you to remove the mesh from the start or end
Miter Joints:
-- This parameter is designed to improve the pinching that occurs at sharp angles. In general, I would suggest keeping this on, however, you can get a slightly different result by turning it off.
Normals:
Add Vertex Normals:
-- This is essentially the same as adding a “normal” node to the new bridged mesh. For more info on Normals, please visit the Normal Node Bible Entry.
Cusp All Source + Destination Boundary Edges:
-- This will ensure that the normals will not smooth in the areas which connect to the start or end of the bridged mesh.
Texture Coordinates:
Generate Unwrapped Texture Coordinates:
-- This will provide default uvs for the bridged mesh. Keep in mind that these uvs aren’t great, and its probably better to output a group from the poly extrude and the labs autouv node set to “UV AutoSeam”
Style:
-- Proportional = There is no documentation for this parameter, however, it appears that the UVS are placed into a rectangular uv island.
-- Rectangular = Again, no documentation here, and it appears to look exactly the same as proportional.
-- Unit Square = The uvs are fit into an evenly packed square.
Scaling:
-- Match Incident UV Scale = the uv island will try to match the scale of the edges which the bridged polys originated from.
-- Fit unit square = This will stretch the UV island to fill the entire uv square
-- Match 3D Scale = This will attempt to scale the uvs based on their world-space scale
Input Geometry:
-- These settings enable you to toggle on/off the input geo, source primitives, or destination primitives.
Thickness:
-- If you’d like to change the thickness of the extruded mesh, then you can do so here. The thickness is controlled by a ramp, and it also gives you the option of exporting an attribute which keeps track of the thickness scale along the mesh.

Pairing:
Twist:
Full-Turn Twists:
-- This will allow you to twist the extruded polygons by a certain number of twists.
Local Twist Attribute:
-- The attribute keeps track of how many times the mesh has been twisted along the bridged polygons. You can re-name this attribute by typing something besides “twist” if you’d like.
Local Twist Ramp:
-- According to the docs, “Controls the twist of the bridge along its length. The horizontal axis represents the length of the bridge. Values of 0.5 represent no twist. Values less than 0.5 twist in one direction, values greater than 0.5 twist in the other direction.” So, going down from 0.5 will twist in one direction, and going above 0.5 will twist in the other direction.
Interpolation:
-- According to the docs, “A technical parameter of the node’s internal algorithm. ‘Rotating frame’ tends to be better for twisting bridges, but in practice there’s no good basis for choosing one or the other. You can try both and see if they make a difference for your bridge.”
Implicit Pairing:
-- According to the docs, “A technical parameter of the node’s internal algorithm. Controls how the node pairs up points other than the initial pair and any explicit pairs. Changing this will often have no effect on the bridge.” ¯\_ (ツ)_/¯
-- Use Relative Edge Lengths = “Pairings are done by matching each point to the opposite sides closest point in terms of proportional distances along the boundary loop from the explicit or default pairs.”
-- Use Edge Counts = “Pairings are done by matching the points based on the number of edges between them and the explicit or default pairs on the two loops.”